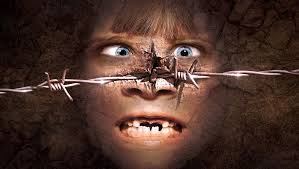 Bhoot Ki Kahani :- It was about 10 o’clock in the night. At that time my friend and I were going to Ghaziabad in our car via MG Road in Gurgaon. It was a dark night. Our car was passing through a very deserted area. It took about four hours to reach this place from where we were coming.

We had yet to travel a distance of two hours to reach the destination. We got hungry while driving. There was only one wish in the mind of both of our friends that some dhaba should be seen on the way. So that the food is eaten and also put some water in the radiator of the car. Because the engine of the car was overheated.
Then our eyes fell on the light burning on the side of the road. We thought that it may or may not happen, there is only some small dhaba, whose light is visible to us. As we were getting closer to that light, that dhaba was clearly visible to us.
We saw that an old lady wearing a white sari was rolling rotis at that dhaba. Seeing the hot rotis being sipped at the dhaba, our hunger increased even more. From the road we diverted our car towards that dhaba. But as soon as both of our friends got down from our car at the dhaba to have food, we were surprised. I was stunned by what I saw.
I saw that the old lady who was seen rolling bread from afar had now turned into a young and beautiful girl. I said softly to my friend, kicking my elbow, hey Amitabh bhai, when we were looking at this lady from afar, she looked old. But how did the old lady turn into a beautiful girl as we approached?
Is this girl some ghost or ghoul? My friend got angry at me and said, “Hey buddy, don’t you talk heedlessly. Looks like you have started watching horror movies a lot these days”. Then my friend said to me while explaining, it may be an illusion of our eyes and it may also be that first his mother is baking bread and now this daughter of her is rolling rotis. My friend again said to me, Oh! Whoever makes rotis, we are only concerned with eating food.
But the ghost of doubt had taken birth in my mind. We sat on the bench of the dhaba. The girl making the rotis was smiling at us. My friend was going crazy seeing the beautiful look of that girl. I thought till that girl brings food, I will check what my friend said.
If her mother would be in the dhaba, she would also be somewhere inside. On the pretext of washing my hands, I proceeded to the side of the dhaba from where the entire interior of the dhaba could be seen. But when I looked inside the dhaba by turning my neck left and right, her mother was nowhere to be seen. Now my head shook how a lonely beautiful girl was running a dhaba in this deserted area.
I came back and told my friend that there was no one inside the dhaba. She doesn’t even have an old mother. On hearing this, my friend started scolding me that you have come here like a CID at this dhaba to investigate or eat. Before I could say anything to him, my friend’s phone rang. His friend was asking where are you guys?
My friend told that we are on MG Road of Gurgaon. His friend was startled when he heard the name of MG Road in Gurgaon. He said that passing on this road at night is not free from danger. Haven’t you got down from your car? On this my friend said that we are staying at a dhaba. Then his friend again asked on the phone where is this dhaba?
This time my friend told that both of us have a dhaba under a peepal tree near the old brick kiln on MG Road, we stayed here to have food. After my friend Amitabh told his friend his location on the phone, what his friend told was shocking. He told that there is no dhaba anywhere on that MG Road.
There is a cemetery near the brick kiln where scary tales of ghosts and ghouls are often heard. My friend broke down in sweat after hearing all this. He understood that we are in some ghostly place at this time. He slowly told me the whole thing. I told my friend that I already told you that there is danger in this place here.
But you were ready to say I love you to that lady ghost. Both of us friends learned that now there is no use in wasting time by arguing amongst ourselves, run away from here before any danger arises. Before that beautiful lady ghost could reach us with her haunted food, we stood up.
Till now the ghost who was baking the roti had also realized that we have come to know about the reality of that dhaba girl being a ghost. Now she started looking at us very angrily. Soon the girl became old again. Her face was very scary now. It was more black in color than coal.
There were eyes lit inwards. There was only one big hole in place of the nose. She had ears and scattered red hair like that of a large animal. She walked towards us screaming the creepy ghost sound, as if she would chew us raw. My friend started the car as soon as he sat on the car. I too jumped and got into the car. We started the car and ran away quickly.
That scary ghost with scattered red hair ran behind our car for about half a kilometer. Then she gave up on us. Now both of our friends took a sigh of relief and then vowed not to come to Gurgaon’s MG Road at night.
For these kinds of bhoot ki kahani (Horror Stories), stay tuned with rahasyamaya.com.
Bhoot ki kahani
0 comment
0
FacebookTwitterPinterestEmail