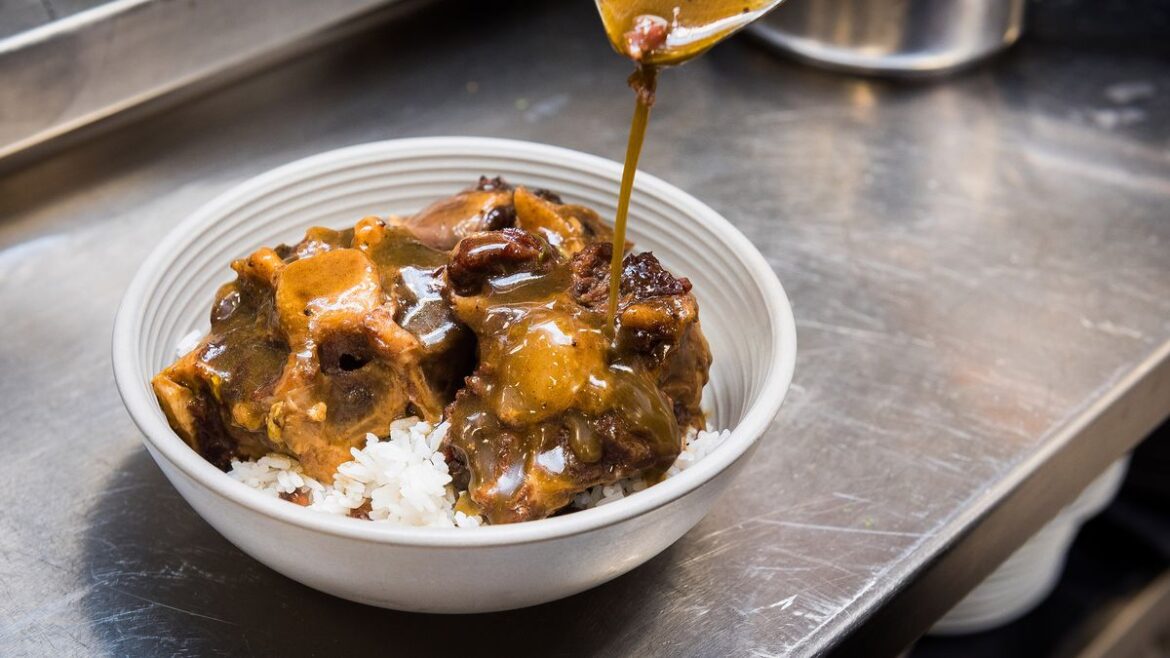 When you think of authentic Jamaican food, you may think of dishes like spicy jerk chicken, flavorful curry, and savory meat patties. With influences from several cultures and time periods, Jamaican food is unique and interesting. From salty and spicy to sweet and sour, this island nation’s food is loved by people around the world.

History of Jamaica and Jamaican Food

Jamaica is an island in the Caribbean Sea. It is lush and green, with beautiful jungle plants everywhere you look. The warm, wet climate is perfect for growing vegetables and fruit, as well as for raising animals. Crystal blue waters around the island are full of sea life, and delicious seafood items like shrimp and conch are always within reach.

The beaches and resorts make Jamaica a paradise for tourists, and the food is a major part of the draw. Jamaican food is as unique as the country itself. Each chapter of the island’s history has added another layer to the rich and vibrant food tradition.

The first people to live on the island of Jamaica, as far as historians know, were the Arawaks. This group is also known as the Taino people. They probably arrived around 2,500 years ago. The Arawaks were farmers and fishermen, and they grew a number of crops including corn, sweet potatoes, and fruit.

Christopher Columbus and his men landed in Jamaica in 1494. The Spanish began to settle on the island by 1509, bringing their food traditions (such as a love for spices) with them. Sadly, the Arawak people were largely wiped out during this time. Following the Spanish, the English came to Jamaica, taking over the island in 1655. They influenced the food scene by bringing new sweet dishes and English cooking methods.

The English held power in Jamaica during the slave trade, and the island was a major hub for slave ships. Enslaved people from Africa brought traditional dishes to Jamaica. Jamaica remained a British colony until 1962, when the country gained its independence.

Over the years, Arab and Asian immigrants also had a hand in shaping Jamaican food. They brought new spices, such as curry, and staples like flatbread.

There are a wide variety of dishes that make up Jamaican food as a whole, but a few of them stand out from the crowd. These are some of the dishes that are most important in the Jamaican food scene, along with the influences that made them popular on the island. You can find these dishes in nearly any Jamaican restaurant.

Jerk is a method of cooking, most often used for meat. Pork and chicken are the most common meats cooked in this way. Preparing jerk involves flavoring the meat with a marinade or paste made with a lot of spices, usually including peppers such as habaneros. After marinating, the meat is smoked over a wood fire. The result is a dry, delicious protein. It is sweet and spicy at the same time, and it goes well with rice and beans or plantains. Jerk most likely came from the original people of Jamaica, the Arawak people.

People often cook jerk inside small buildings called jerk huts. The cooking fires are built inside the huts, and they burn at low temperatures to cook the meat slowly and evenly.

Patties are small, hand-held pies. Golden-brown, moist, and crispy, they are usually about the size of a hand. Patties can be filled with meat, vegetables, or both. They are a common and inexpensive street food in Jamaica. The seasoning in patties is often sweet, spicy, and smoky. This popular dish came to be as a result of British settlers on the island, who brought the pastry recipe from England.

Curry refers to a number of dishes that can be made using curry spices. These spices originally came from Asia, and they were brought to Jamaica by Asian and European immigrants. Curry dishes are usually made up of meat or vegetables in a fragrant, spiced sauce. There are a lot of different things a person can do with curry. It can be very spicy or very mild, sweet or savory, and anywhere in between. Curry is delicious along with sides like rice or cabbage.

Because of Jamaica’s natural resources, its history, and the influence of many cultures, authentic Jamaican food is defined by variety. There is good soil and plenty of water, so the fruit and vegetables are very high-quality. Arawak, Spanish, English, and Asian influences bring flavors from all around the world.

“Jamaican food” is a truly special mix. The phrase calls to mind warm spices, sweet and smoky flavors, and slow-cooked meat. Jamaican food is the story of the country and its people. It’s no wonder that so many all around the world just can’t seem to get enough!