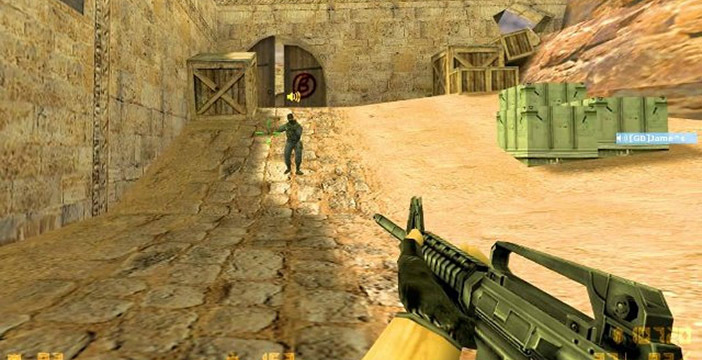 Don’t forget to buy a Kevlar vest with a helmet, if you don’t have one your chances are half. I recommend you always buy at least a vest. It costs a lot less than a vest with helmet and can save your life.By the way if you do not have cs 1.6 you can find cs 1.6 download here.

Try to stick together with your team, but don’t stick together and keep your distance. If you don’t, you will get in each other’s way the first time you collide with an enemy and become very easy prey. On some servers you might even get kicked out of the game for “blocking” more often.

Use a config that is comfortable for you. If you download some pro-fiction player’s config from the internet hoping it will help you, you are making a mistake. Look for and try the right setup that you can’t end up throwing your weapon on the ground when you retreat instead of switching to grenade.

Keep an eye on your teammates’ positions on the radar to avoid mistakes and accidentally killing a teammate, which on most servers will get you automatically killed the next round and your team weakened. That’s why it’s a good idea to use the opaque radar type (marked as “Solid” in the settings).

When you are running in retreat (to the right), change your running direction (to the left) and shoot at the exact moment you change running direction. The game will think you are standing still, so the shot will be accurate. It takes a bit of practice, but you’ll soon get the timing right in your head. If you’re not running using a dodge, but only forward or backward, the only thing you can do to get an accurate shot is to either crouch or just stand still, but either way you need to calm down. If you get too into the game, you’ll often get carried away, and instead of shooting tactically in bursts, you’ll shower your enemy with a continuous blast of lead. Very often, you won’t even get one bullet off.

When shooting at longer distances with an automatic rifle, it is advantageous to batch, i.e. shoot a few rounds at a time. As you know guns become inaccurate when shooting longer and most of the ammunition is wasted. But if you dose, you can achieve more accurate shooting by taking small breaks between rounds.

Dispensing is overall very advantageous and everyone should make it a priority to master it, as it can be used in almost every situation, except body on body =). The most common weapons you’ll come across in CS are undoubtedly AK47, M4A1 and AWM. With the AWM (sometimes also AWP), rationing somehow cannot be used, but with the other two weapons it is used to a great extent.

The M4 is more accurate and more advantageous at shorter ranges, where you can fire more rounds in one burst without much sight blur, but at longer ranges this weapon is a nightmare to shoot. The AK47 is a bit more powerful than the M4 and thus “ejects” more. I recommend to dose the AK after two to four rounds, as shooting more is very inaccurate.

The Kalashnikov is very accurate in small bursts and combined with its power, little is enough to kill the enemy. This weapon also has one interesting feature, namely that a bullet fired in a second burst is always more accurate than the first bullet.